Meribel is famous for its chalets, but there are also plenty of apartments and some hotels. The resort is spread out, but the bus service is good and some of the suburbs have their own lifts or are skirted by a piste – two of them, Meribel-Mottaret and Meribel Village can almost be considered separate resorts. Lower down the valley, Les Allues provides cheaper accommodation.

Where to stay in Meribel

In the centre, near the main lift station at La Chaudanne, would be most people’s first choice if they can find somewhere affordable. La Renarde and Moulin are the suburbs closest to the centre, and within easy walking distance of it, although from some parts of Renarde you might choose to ski rather than walk as it is skirted by the piste. Mussillon is a long walk or a short bus ride away. Morel and Altitude 1600 are even further and feel much more detached from the centre, partly because they share the Morel lift, and have their own shops and bars so they are more self-contained. Beyond them, in splendid isolation up the mountain, is Altiport where any accommodation is ski-in, ski-out. Belvedere is similarly high and mighty and slightly cut-off. Les Chalets is between Belvedere and La Renarde. It’s a quick bus ride or a long walk into the centre but in the morning most people tend to walk to the piste and ski down.

To the side of Meribel, on the road to La Tania and Courchevel is Meribel-Village. This definitely feels like a separate resort, and a nice quiet small one too.

Up the valley, Meribel Mottaret can probably claim to be the best situated village in the whole of the 3 Valleys for keen skiers. It has the quickest links to Val Thorens, les Menuires and Courchevel, and a great 2952m north-facing mountain – Mont Vallon – on its doorstep. But it has very little apres ski or nightlife.

You can also stay down the valley from Meribel in Le Raffort and Les Allues. They are quiet villages that have access to Meribel’s lifts at Chaudanne centre via a gondola link (Olympe 2 and 3) that takes around 20 minutes. Beware, the gondola stops quite early in the evening leaving little time for apres ski. In theory you can ski down to both these villages but this depends on snow conditions.

Le Kaïla is a 5 star hotel with a Michelin-starred restaurant, located beside the piste but also near the centre of Méribel, with direct access to the ski slopes. 4 star hotels include Le Chaudanne, Le Tremplin and Le Savoy in the centre; Hotel Allodis up the slope near Belvedere; and Mont Vallon and Alpen Ruitor in Meribel-Mottaret. Three star hotels include Eterlou and Merilys in Meribel and Les Arolles and Madame Vacances Hôtel Le Mottaret in Mottaret. There is also a basic but well liked 2 star hotel near the centre of Meribel – Hôtel Eliova Le Génépi.

Search these and other Meribel hotels and book online >>>

There are hundreds of self-catering apartments in Meribel, some now classified as ApartHotels because of the services provided. Meribel-Mottaret has some managed by Pierre & Vacances, like Les Cret and Les Bleuets. In Meribel itself the Maeva Particuliers residences are also highly rated and very central.

You can use the link below not only to search for apartments but also to check latest availability, compare prices, see exact map locations and read previous guest ratings and reviews. The accommodation finder can be expanded to include Les Allues as well.

Search these and other Meribel apartments and book online >>>

Alpine Answers has over 100 chalets in Meribel on its books, fitting every size of family or group imaginable. Most are catered and many come with the option of airport transfers and flights from the UK (ask for a discount if want to organise your own travel and these are included in the price). Search their chalets in Meribel-Mottaret here and their chalets in all other parts of Meribel here.

Ski Total has catered chalets in Meribel. Standard holiday packages include accommodation with ‘chalet board’ meals, flights from the UK and airport transfers. Search their Meribel chalets here.

Inghams provides catered chalet and chalet-hotel holidays as well as hotel and self-catering apartment holidays in Meribel including flights from the UK and airport transfers.  Search their Meribel holidays here.

You can also book chalets without catering or flights in Meribel and Mottaret direct. Search and book these self-catered Meribel chalets here.

Accommodation in the rest of the 3 Valleys

Lastly, if you can’t find what you want in Meribel but still want to ski the 3 Valleys, you can also search for accommodation across the 3 Valleys and book online here>>> 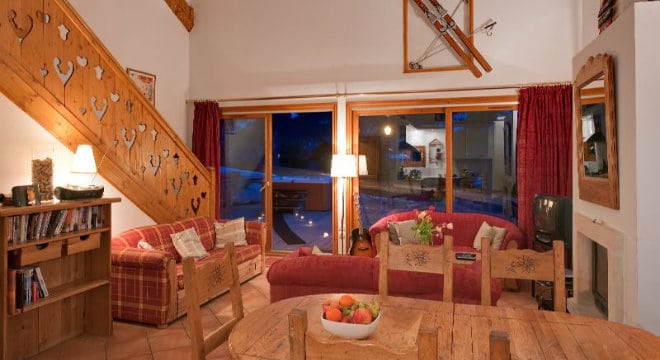 Chalet Aurigny is a comfortable and modern chalet sleeping up to 10 guests. It has a prime location in Meribel Village, within 60m of the chair lift and with excellent mountain views from the South facing terrace. The luxurious Chalet du Vallon is located in the hamlet of Meribel Village, just 2 minutes walk from a chairlift linking up to the 3 Valleys. The chalet offers an outstanding level of food and service. It sleeps 8 in great comfort and also features a steam room. Chalet Pasarale is one of the best situated catered chalets in Meribel, being in a ski-in/ ski-out location just above the centre of the resort. It has 5 bedrooms, all with ensuite facilities, and can accommodate up to 10 guests.